International Data Corporation (IDC) recently posted a report on worldwide smartphone market share in 2015 quarter 3. According to the statistics, shipment of smartphone is predicted to reach 355.2 million, growing 6.83% compared to the same period of last year.

As IDC analyzes, iPhone should be responsible for the lower shipment volume compared to the forecast due to the insufficient supply. In addition, the price of Android flagships, which is higher that consumer expected, is to blame.

IDC says that Samsung dominates the market with the biggest share, even rules over iPhone. And the successive rankings are Huawei, Lenovo and Xiaomi, the third biggest giant manufacturers in China. 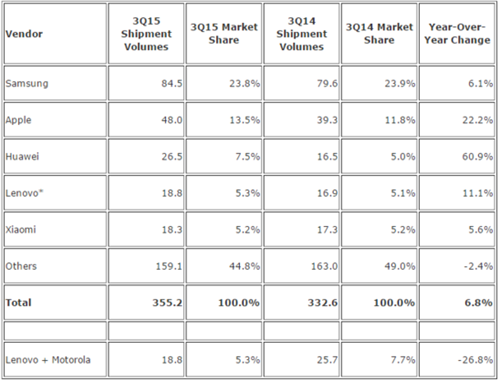 Samsung: With 6.1% growth, Samsung remains its leadership over the smartphone market. It now still stays in the high-end market. And its achievement is in a way attributed to the two flagships release in August - Galaxy S6 and Galaxy Note 5. These two models share the partly potential market with Apple, especially in September, when the new iPhone was still unavailable. Plus, Samsung also focus low-end market with Galaxy Core/Grand Prime, which are available less than $200. These two models help Samsung gains big orders.

iPhone: Apple wins its market share with iPhone 6s and iPhone 6s Plus. It has shipped 40,800 thousand during Q3, which is 22.2% increased compared to 2014. It should be highlighted that the shipment volume of iPhone 6s and 6s Plus averages about 1,300 thousand per week, which helps Apple gain the market share in both China and America. The new generation, which is equipped with new features like golden rose shell, Force Touch, A5 chip, etc., attracts fans overseas. Moreover, consumers are willing to purchase iPhone 5s and iPhone 6/6 Plus at a lower price. Besides, Apple induces customers to upgrade their devices by accelerating the upgrade of their product so as to increase its shipment volume.

Huawei: Good gracious, yes. Huawei's shipment volume swells to 2,650 thousand, making a 60.0% increase. Some cannot believe their eyes of this amazing data. But Huawei has done it since it decided to mainly aim at high-end market and gain 25% of the market with Honor 6 Plus and Ascend P8. Nevertheless, the American doesn't see the success of Huawei. So, the company cooperates with Google, releasing Nexus 6P. This signals that Huawei will focus on the American market from now on.

Lenovo: After mergence with Motorola, Lenovo makes big stride in the field of smartphone development. The report also shows that Lenovo and Motorola have shipped 1,880 phones, with 11.1% mounting. The company makes sortie in Middle East, Africa, and Europe. Its dominant series, including Moto X, Moto G and Moto E, are greatly competitive in North America and Latin America.

Xiaomi: Xiaomi, a big brand in China Mainland, has exported 1,830 thousand phones during this quarter. So far since 2015, it has shipped 5,210 products. Xiaomi keeps promoting itself in South-east Asia, India, and Brazil. Meanwhile, the company sells most of its products in China. Another reason why Xiaomi can gain success is that the company has released Redmi Note 2, Redmi 2A, and Mi 4c in China. Among them, Xiaomi Note 2 wins numerous fans in the country.