APFS stands for Apple File System. It's Apple's replacement for HFS+ file system and it will eventually make its way to iOS, macOS, tvOS, and watchOS – covering everything from your Mac, iPhone, iPad, Apple TV and Apple Watch. Right now, iOS 10.3 is the only publicly available OS that runs on APFS. This guide will show new features of iOS 10.3 APFS you should never miss.

Save More Space
APFS is made for mobile. It calculates available and used storage capacity differently than HFS+, and that often results in having more room available for your data after updating to iOS 10.3 and APFS. So, for example, a typical 16GB iPhone with 2GB space remaining before the update shows around 3 – 4GB of available space after the upgrade, a substantial increase. 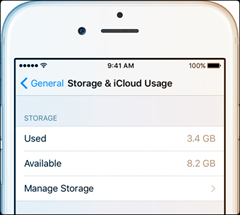 Snapshot and Clones
Two of the biggest features in APFS are snapshots and clones. Snapshots are a single, point-in-time, read-only instance of the file system.

Crash Protection
APFS also provides excellent crash protection for your Mac by employing a new copy and write metadata scheme where your Mac's metadata writes to a new location on stable storage. For those that experienced the white screen of death or the spinning beach ball (also of death,) this crash protection is welcome news!

So with APFS, if your Mac panics, loses power, or experiences similar startup and performance problems, APFS protects your data and keeps it safe. No more worries of losing everything after a power outage or kernel panic

Stronger Encryption
Another attractive feature of APFS is its encryption paradigm. With Apple File Systems, you get robust data protection features and full disk encryption. APFS encrypts every file on your iDevice individually.

Stronger encryption is a significant step forward in proving Apple's commitment to user security and privacy.

Delete Exact Same Files
The real beauty of APFS is that it deploys the exact same file system across all platforms and keep file uniformity, no more variations of HFS+ to accommodate different devices. APFS grows with the future. So unlike HFS or HFS+, APFS is built dynamically, recognizing the need to change-over-time as technology, software, and hardware advance.