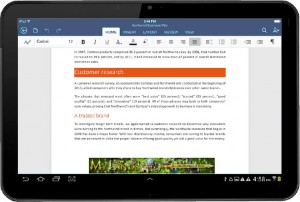 After a few weeks of trying the preview versions of Microsoft Office for Android tablets, we are finally able to download the finished versions of Word, Excel and PowerPoint on Google Play Store to our mid-sized tablets (with a display that’s between 7 and 10.1-inch in size) for free.

Office for Android works on tablets running Android KitKat or newer that also have to have an ARM-based processor and 1GB of RAM or above. All of the apps require you to have a Microsoft account and like their iOS counterparts, you'll be able to create and edit documents, spreadsheets for free during a one-month trial. The reason Microsoft has been able to keep both Android and iOS versions identical is thanks to a new cross-platform approach to the codebase of Office.

If you want to take full advantage of all the productivity offering’s features, you can sign up for a subscription to Office 365. If you are a business or organizational user, the Android tablet is now another device on which you can use Office, logging in with your Office 365 business credentials.

Although the preview of Microsoft for Android generated more than 250,000 downloads across more than 110 countries, we can’t yet tell whether these apps are really a big dealbreaker though, until we’ve test it in a day-to-day basis. So download the apps on Google Play store and let me know what you think: are the Windows versions of these tablet apps are as good or better?