Recently, it is said that Samsung Galaxy S5, which is the next generation of flagship smartphone of Galaxy S series, will be released in the first season next year. Some configurations of Samsung Galaxy S5 are exposed here and there on the Internet. Nowadays, there’s a Samsung new smartphone called Samsung SM-G900F in Browsermark database. It is possible that it is Samsung Galaxy S5 as we know. 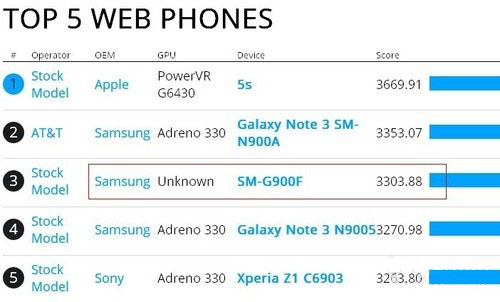 From the test score that office site of Browsermark published, we can see that Samsung SM-G900F ranks in the third place. The performance of it has reach to 3303.88 score, so it remains a high-end level. What we should illustrate is that this score is close to the Samsung phone Note 3--N900A which carries Snapdragon 800 and a Quad-Core processor. So it was inferred that SM-G900F is very possible to carries Snapdragon 800 and a Quad-Core processor as that of Samsung Note 3.

In addition, it’s a pity that on office website of Browermark, there’s no detail information about the processor and the resolution of SM-G900F. There only list that this phone model adopt Android as its operating system. If Samsung Galaxy S5 also carries Snapdragon 800 and a Quad-Core processor as Note 3 does, it will disappoint some of Samsung S5 users even if Snapdragon 800 and a Quad-Core processor is now a high-end configuration.