Recently, Nokia was focused by all the people again since it returned to the phone market. Even though Nokia will not bring out the product of Smartphone until the third quarter of 2016, it seems that it will not hinder the exposure of the Nokia's returning work constantly. This design, called Nokia C1, was said that it would adopt integrated body design ,with adding Android and Win10 Mobile double version systems. And according to the latest information, Nokia C1 would launch two versions, which based on the sizes of screen, and also had differences on the location.

In the past few days, the foreign medias said that Nokia C1 would bring out two versions based on the sizes of the screen. One is 5-inch with the internal storage of 2GB RAM+32GB ROM, while the other is 5.5-inch with 3GB RAM+64GB ROM internal memory. Both of them had the same level of resolution at 1080p, and the internal system will also have Android and Win10 Mobile versions. In terms of photo-taking, 5-inch small screen version will have 5MP front camera and 8MP rear cam ,while the 5.5-inch one will have 5MP on preposition and 13MP on post-position. 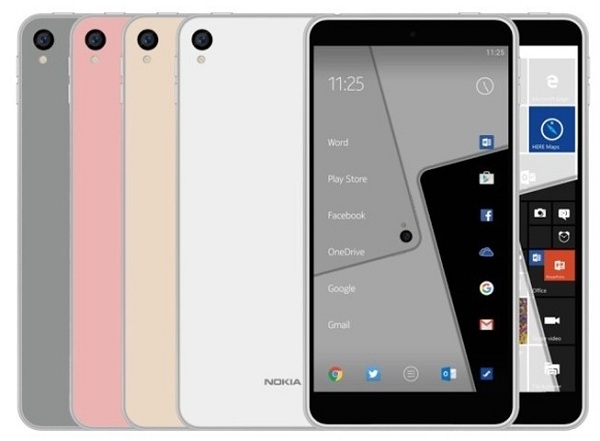 From this exposed model's parameter ,the design of Nokia's returning work seems that it's market positioning is not high and the configuration of camera even lags behind . But it needs to be explained that, owing to the cooperation with FOXCONN, kind of foundry, it may be probably to keep on the path of high cost effective, like Nokia N1 tablet , which will be a great help to occupy the market share quickly.

However, this news has not been proved by Nokia. Thinking about that Nokia will not issue the first Smartphone again until half year later, it is too early to make a conclusion on the configuration of phone hardware at the present time. So, don't take it too serious on the predicted configuration information of the Nokia C1. And let us keep looking forward to more news about this phone.