How to Root Android Phone with Framaroot

To root or not to root? That is a question that many Android users ask when they are hesitating whether or not to root their phone. They want to completely back up their phone, customize everything, automate everything, install incompatible apps they like, and so on. Meanwhile, they are worried about risks caused by rooting. That's why we choose Framaroot – a safe and fast root program to root.

Framaroot is a free app including several exploits, including Boromir, Faramir, Barahir, and more. Now you can root your Android phone without a PC. Just use Framaroot. Besides, you can enable your device back to unrooted status with this application.

Note: Back up your Android phone before you root it in case of any data loss.

Step 1. Download and Install Framaroot
Download Framaroot on your Android phone. When this is finished, Android will automatically enter the installment page. Click the button "Install”. 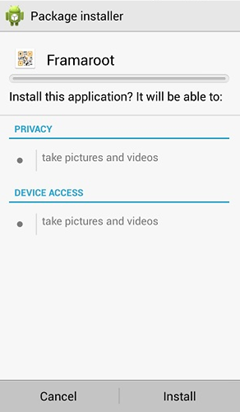 Step 2. Run Framaroot and Root
Tap the icon of Framaroot. Then you will have the interface as below. You will be required to select an action to execute after root. Select "Install SuperSU”. Then choose an exploit in list above to potentially root your device. "Boromir” is recommended as it works for most Android phones. If it fails to root, try "Faramir” and "Barahir” successively.

Step 3. Root Succeeds
When exploit succeeds, a note will pops-up. Click "OK”. Then you will be required to reboot your phone. 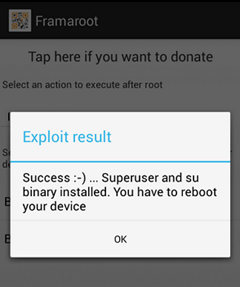 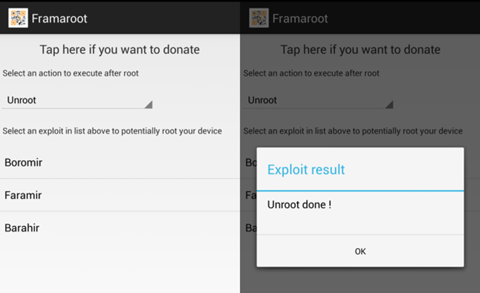 Thanks a lot sir. I have rooted my Canvas Nitro using Framaroot successfully but I downloaded framaroot apk from https://framarootappdownload.com

This Framaroot is it like with oneclick root. What is more better?

Hi James, you can try Kingo Root or King Root.

A well written post shared by admin, like to see more of you in future.
Commercial playground equipment

Thanks! Excellent post anyone who is riding bike to wear the safety equipment like Motorcycle cargo pants and Kevlar motorcycle gloves etc.

Hello. This article was extremely remarkable everyone who is riding bike to wear the motorcycle safety gear such as Kevlar motorcycle shirts, gloves, etc

This is such a great resource that you are providing and you give it away for free. best motorcycle jeans I love seeing blog that understand the value of providing a quality resource for free.