It is said that Tizen phone, which will release in Russia next month, will also be put into the Brazil market later. Moreover, being interviewed by Reuters, Yoon Han-kil, the vice-president of Samsung Product Planning Department, announces that Samsung will release at least two model of Tizen smartphone. One is a high-end handset which is similar to Samsung Galaxy S4, the other will be positioned in mid-range market. Yoon Han-kil also indicates that Tizen will be unveiled before the end of the second quarter.

As the releasing date of Tizen become closer and closer, there are some pictures of SM-Z9005 and some videos showing you how to use this phone on the Internet. When it comes to the hardware configuration, it is said that SM-Z9005 will be equipped with a dual-core processor which adopt Krait framework, a 1GB RAM, a 720P resolution ratio touch screen and a LTE supporting network. It is not know whether these will be the final configuration of SM-9005 yet. Besides, Samsung has sent SM-Z9005 to some of the developer to text it before selling it in the market. 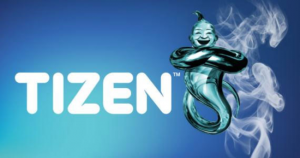