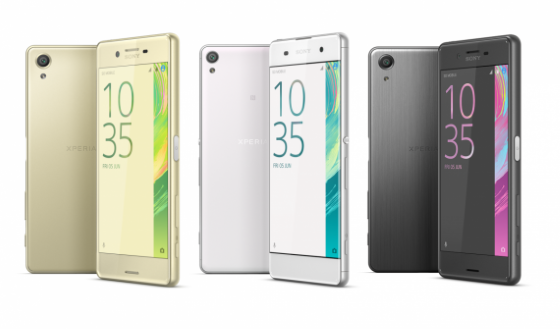 On Sony Xperia XA, the low-end Sony smartphone is equipped with a MediaTek MT6755 chipset processor and a 2GB RAM, 16GB storage. However, the only pity is that there's no fingerprint scanner adopted and the battery is only 2,300mAh.

Sony Xperia X is a middle-end Android smartphones really good at capturing photos. In this model, a new Predictive Hybrid Autofocus is adopted on Sony Xperia X with a 23MP rear camera and a 13MP front camera. The battery capacity of Sony Xperia X is one step ahead of Sony Xperia XA, with 2,620mAh. The Snapdragon 650 processor with 3GB of RAM will also give us a smoother experience while we are using the device.

What's more, Sony Xperia X Performance might be the flagship device of Sony in Xperia which is equipped with a 23MP rear camera and a 13MP selfie shooter, fingerprint scanners and more. The Snapdragon 820 processor is also better than that on Sony Xperia X. Moreover, you can record 4K video with Xperia X Performance and can boost ISO up to 12,800. And as some popular Android devices do, it supports waterproof now and can protect the smartphone from being damaged by the water.

Some reports say that Sony Xperia X and Xperia XA are now available for pre-order in the U.K. So, this Sony Xperia X series will come up very soon.