Android is a much more open mobile operating system than its main competitor iOS. Android enables users to do and access more, but it has never been an entirely open system and has had some limitations. Some restrictions on what can be done with devices out of the box are necessary in order to prevent consumers from accidentally bricking their devices.

One of the restrictions that Android has traditionally faced, as has every major smartphone, is that it only allows users to install a single instance of each app that they download. Apps are tied to accounts so that users can redownload their apps for new devices, but they can only download and install one copy.

However, in 2016 that all changed. Xiaomi first introduced the dual apps feature, which caused quite a buzz when it was first announced. Since then, other manufacturers have followed suit, notably Samsung, and this feature is now becoming increasingly common.

What Are Dual Apps?

'Dual apps' refers to the ability of a single Android device to have multiple installations of a single app. Typically, only a single instance of any app can be installed on a smartphone. Consequently, mobile users are restricted to the number of accounts allowed by the app.

Consider Instagram, which allows users to connect up to five accounts to a single device. If you are managing more than five accounts, this leaves you with no option but to manually log in to some of your accounts.

However, by using the dual apps feature, it's possible to effectively double the account limit. Each install of the app is entirely separate and self-contained, meaning that any files stored or downloaded within the app will only show up within that instance of the app. 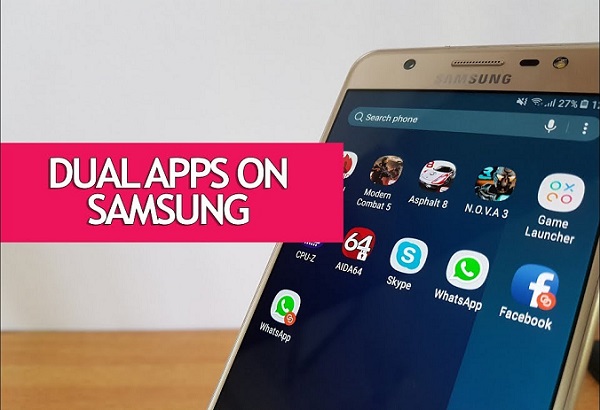 One of the cool things about Android is how open it is. After all, it is ultimately just another Linux build. Part of this openness is allowing the user to install apps themselves directly. On an iPhone, the user is forced to download apps through the App Store and can’t sideload or install an unsigned app. On Android, anyone can distribute their own APK file and anyone else can use that APK to install the app onto their device.

The first manufacturer to introduce a dual apps feature for their phones was Xiaomi with the MIUI 8, Since then, many leading smartphone manufacturers have introduced their own native versions of the same thing. Xiaomi was definitely ahead of the curve though and they’ve been offering the feature for the last three years. Samsung introduced the ability to run multiple instances of the same app for its Galaxy S8/S8+. These phones also offer a Secure Folder function that creates a self-contained encrypted container, within which the user can install separate versions of their apps. This means that users on the S8 can have two pairs of dual apps on their devices.

Dual apps isn't quite a standard Android feature yet, but it seems like a likely contender for future updates. It would be surprising if dual apps weren’t a core Android feature within the next five years. There are numerous potential applications for the feature and an ever-expanding list of use-cases thanks to the constant stream of new apps being developed that could potentially take advantage of it.

Is It The Future?

It seems a foregone conclusion at this point. Since Xiaomi introduced the concept, it has spread across most of the major manufacturers within a few years. Given the combined market share of the manufacturers who offer dual app use, it seems very likely that it will become a core Android feature. Consumers are very happy with it and it is an innovation that many had been calling for.

It is also very useful for people who maintain multiple email addresses for business and personal use. The Gmail app lets you add multiple accounts to a single install, but the app is also designed to integrate all those accounts into one feed. Therefore, in order to maintain different Gmail logins in isolation, you need to use the dial apps feature.

It’s also worth remembering that most Android handsets today have two SIM card slots. Most of us only use one SIM card, but with multiple physical slots and a growing number of manufacturers including e-SIM technology in their devices, there are plenty of people who can benefit from being able to use a different installation for each SIM card/phone number.

There are plenty of reasons why having the option to use dual apps is desirable for users. The added convenience, privacy, and security are all things that consumers increasingly demand from tech companies, enabling dual apps as a core Android feature would go a long way to giving users some much-needed control over their online privacy and identities. With multiple installs, users could have an install with their real name and one with a screen name for when a level of anonymity is desirable. Hopefully, we will see Google recognizing the value of this feature and making it something that every Android device can do.