How to Take Screenshot on Android via AirDroid Web

Step 1. Sign in on both AirDroid for Android and AirDroid Web

Step 2 Choose Device to Save Screenshot

After entering the screenshot app, you will be shown the below window. The real-time interface of your Android phone will be shown. Next to the camera-like icon on AirDroid Web, there's a drop-down list. Click the triangle and you will be shown two choices: "Save to computer" and "Save to phone/tablet". You can choose either of them as you like. 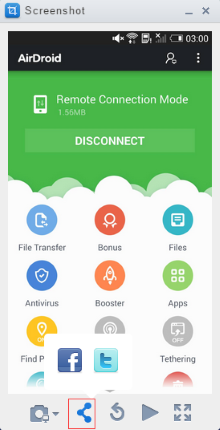 That's it. This is extremely helpful for Android users to take screenshot even if there screenshot capture shortcut keys broken. AirDroid is quite a helpful assistant, isn't it?

In what situation we would need AirDroid?

When screenshot is open on desktop, does it open a notification on phone