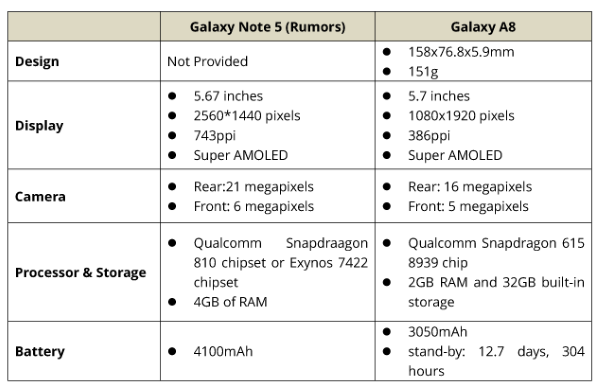 You can see that the screen size of Galaxy Note 5 and Galaxy A8 are becoming larger and larger compare with the devices released years ago with the comparison tablet above. This indicated that more and more Samsung users prefer portable devices with larger screen so Samsung adapt to meet the preference of the majority. As a next-gen flagship Samsung, Galaxy Note 5 has a better display configuration to offer its users a better graphics.

According to the market research, more and more people love to take photos with their smartphone and post them on their Facebook, Twitter, Instagram and more social networking service. So, to follow the market orientation, Samsung has upgraded its camera to give you a better life.

As processor, camera, and more features become much more extraordinary, it will consume more battery and the standby time become shorter and shorter. And Samsung has a foresight of this and they enlarge the battery capacity to 3000mAh~ 4000mAh and prolong the standby time.